The “Journal des Savants” is the oldest literary newspaper of Europe. Founded in 1665 by Denis de Sallo, adviser of the Paris Parliament, it was supported by Royal Patronage in 1701. Stopped in 1792, it was restored and reorganized in 1816: Until 1900, it was published at public expense by a committee chaired by the Minister of Justice, then by the Minister of Public Instruction and reserved its columns to the members of the Institut de France. When for budgetary restrictions it was about to disappear, the Institut de France replaced the State in paying for its printing costs. Under the exclusive responsibility of the Académie des Inscriptions et Belles-Lettres since 1909, the “Journal des Savants” publishes original articles making significant breakthroughs in its different fields of competence, both because of their results than because of the new aspect of their method. 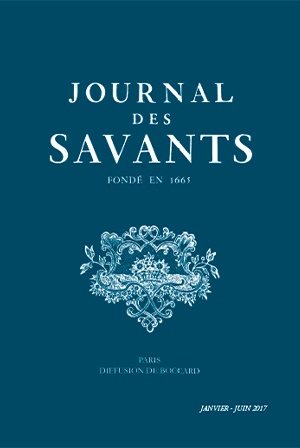